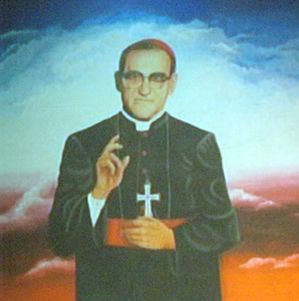 Monsignor Oscar Romero y Galdamez, fourth archbishop of San Salvador, was assassinated while presiding at a memorial Mass in the Carmelite chapel of the Hospital de la Divina Providencia on March 24, 1980. The Archbishop was standing behind the altar, preparing the gifts of the offerty, when two mercenaries approached the chapel and fired a single shot from a U.S. military assault rifle. Archbishop Romero died within minutes from shock and blood loss. He died as a martyr and a prophet, as the greatest source of hope for millions of oppressed and impoverished Salvadorans, and as the greatest threat to the greed and arrogance of the oligarchy of 14 families that ruled El Salvador as if it were their own fiefdom.

Romero had undergone a Metanoia that transformed him from a timid defender of non- controversial virtues into a towering champion of the faith and of the faithful. He had discovered, in his own words: “The word of God is like the light of the sun. It illuminates beautiful things, but also things which we would rather not see.”

Much of the illuminated reality was utterly unconscionable. Less than a month after his installation as archbishop of El Salvador, his friend and colleague Rutillo Grande, SJ, was machine-gunned as “punishment” for helping peasants organize to secure self-determination. Soon after, a right-wing paramilitary group ordered all Jesuits to leave the country or to face execution. Although Fr. Grande’s murder had enormous impact on Romero, he realized that it was not an isolated incident. Literally tens of thousands of men, women, and children were murdered by military and para-military death squads under the guise of “anti-communism,” “law and order,” and “maintenance of traditional values.” On one day alone—January 22, 1979—paramilitary snipers killed 21 people and wounded 120 more while they were staging a peaceful protest march through downtown San Salvador. In rural areas, campesinos were murdered on a daily basis and their bodies were left to rot on road sides, as warnings to others who might “forget their place.” The death squads, commanded by Major Roberto D’ Aubuisson, a Salvadoran army officer who founded the right-wing ARENA political party, and self-proclaimed “fuhrer of San Salvador”— routinely murdered, tortured, raped, and looted with absolute impunity. The police and the courts existed primarily to exonerate the guilty and to punish those victims who dared to speak about the mistreatment they had suffered.

Beyond the overt violence, Oscar Romero saw institutionalized social and economic injustice on a pervasive scale. Two percent of the population controlled 57 percent of the nation’s usable land, and the 16 richest families owned the same amount of land utilized by 230,000 of the poorer families. The use of the comparative, rather than the superlative, is intentional since the poorest families had no land whatever, and were forced to sleep in ditches and muddy fields. Hungry farm workers were beaten or shot for eating a piece of the very produce they had grown. Mines and factories operated under the theory that it was cheaper to replace a dead or crippled worker than to repair defective equipment. Sixty percent of all babies died at birth, and 75 percent of the survivors suffered severe malnutrition. Hundreds of thousands of men, women, and children died from diseases that could have been cured by basic medications.

Facing such realities, Archbishop Romero began to ask his now-famous questions: “How can Christians do such things to each other? What can the Church do to help?” He found his answer in the realization that he had been called to Christ a second time, to the Christ who spoke to him in the Beatitudes. He found it also in the principles of the Liberation Theology that he had once condemned; in the voices that had risen at the Second General Conference of the Latin American Episcopate at Medellín, Colombia, and in the simple yet powerful truth of Fr. Gustavo Gutiérrez’ dictum: “To know God is to do justice.”

In the last sermon Romero preached, only one day before his assassination, he spoke directly to the military: “I want to make a special appeal to soldiers, national guardsmen, and policemen: each of you is one of us. The peasants you kill are your own brothers and sisters. When you hear a man telling you to kill, remember God’s words, ‘thou shalt not kill.’ No soldier is obliged to obey a law contrary to the law of God. In the name of God, in the name of our tormented people, I beseech you, I implore you; in the name of God I command you to stop the repression.”

These are among the most famous of Monsignor Romero’s words, and they are the words that best define his Christianity, his ministry, and his character. In the 1988 Romero lecture, Archbishop Luciano Mendes, President of the Brazilian Conference of Catholic Bishops, told us: “[Archbishop Romero] was a man of nonviolence who paid a great price for his solidarity with the oppressed. His exhortation to the soldiers to lay down their arms and stop killing their own people was the last straw. Men of violence could not accept that a man of peace should ask people to stop killing.”

Monsignor Romero had long been aware that his vocation was a dangerous one. He saw himself denounced in the government-controlled media on an almost daily basis and he received numerous death threats. He responded by physically isolating himself from his colleagues and friends to the greatest extent possible, trying to prevent them from becoming collateral casualties, but he refused to be silenced. In his final Sunday homily, just one day before his assassination, he said: “I have no ambition of power and because of that I freely tell those in power what is good and what is bad, and I do the same with any political group—it is my duty.”

Just days earlier, Romero told an editor of the Mexican magazine Excelsior: “I need to say that as a Christian I do not believe in death without resurrection. If they kill me, I will rise again in the people of El Salvador…If they manage to carry out their threats, as of now, I offer my blood for the redemption and resurrection of El Salvador. If God accepts the sacrifice of my life, then may my blood be the seed of liberty and the sign that hope will soon become a reality. May my death, if it is accepted by God, be for the liberation of my people, as a witness of hope in what is to come. You can tell them that if they succeed in killing me, I pardon and bless those who do it. A bishop may die, but the Church of God, which is in the people, will never die.”

Archbishop Romero’s final prophecy is reiterated by Pope John Paul II in his 1994 apostolic letter, Tertio Adveniente: “At the end of the second millennium, the Church has once again become a Church of martyrs…It is a testimony that must not be forgotten.”

Similarly, in “Salvifici Doloris,” of 11 February 1984, on the Christian Meaning of Human Suffering, the Holy Father wrote: “This glory must be acknowledged not only in the martyrs for the faith but in many others also who, at times, even without belief in Christ, suffer and give their lives for the truth and for a just cause. In the sufferings of all of these people the great dignity of man is strikingly confirmed.”

These pages lead you through Romero's Life and the History of the Civil War in El Salvador. They contain information about past Lectures and their Speakers.

Remembering the testimony of Romero of the Americas and sharing his witness for faith, truth, and justice is the raison d’être of the annual Romero Days at the University of Notre Dame. Each year since 1987 we come together for seminars, workshops, memorial services, and major addresses that help us to honor Romero’s memory and to grow by virtue of what we learn of the extraordinary life and the tragic yet salvific death of the great martyr-prophet of the twentieth century, Oscar Arnulfo Romero.